Posted by webmaster on Mar 11, 2010 in Testimonials, Vulvodynia

Nina was such a great success story!  She was one of my younger patients, age 19, with celiac disease and social anxiety disorder.  She was in a long-term relationship and in college.  She had complained of having pain during her first attempt at intercourse and any subsequent attempts with pain at the vaginal entrance.  Digital stimulation was painful but she still participated to have some sort of sexual experience with her boyfriend.  She was orgasmic with clitoral stimulation. She was very bright, very quiet but determined to fix her problem.

She was given a home exercise program including stretches, instructed in dilator use and self-pelvic floor releases.  She was in college so she was unable to take warm baths that was also prescribed for her.  Manual therapy to her hips, pubic region, sacroiliac joints and lumbar spine, gluteal region, and pelvic floor muscles occurred each session.

By her fourth PT session, she had pain-free insertion of 1 finger, improved hip mobility, and continued to progress very well with dilator use (up to level 2 now).  By her 10th visit, I noted that the redness of the vestibule region was not improving and suggested she see a vulvar pain specialist and consider applying topical estrace cream as her long term use of oral contraceptives may also have been a factor.  She did exactly that and was prescribed topical estrace cream compounded in a non-chemical base daily application to the vulvar vestibule.

During her 16th session, she progressed to tolerating 2-3 finger insertion…on her way!  She still had some pain but significant improved introitus (vaginal opening) flexibility and had moved onto using a medium dilator (level 3).  I found that her hymen tissue was tight…. there was a tight band in the upper left quadrant so we spent some time addressing this issue via manual stretches.

At her 24th session, she reported breaking up with her current boyfriend and starting a new relationship with a partner that was more supportive and understanding.  By her 26th session, she tolerated 3 fingers insertion with very little discomfort and by the next session had had intercourse 4-5 times with no pain, using dilators prior. She was discharged on her 28th session and reported not needing to use dilators before intercourse!! 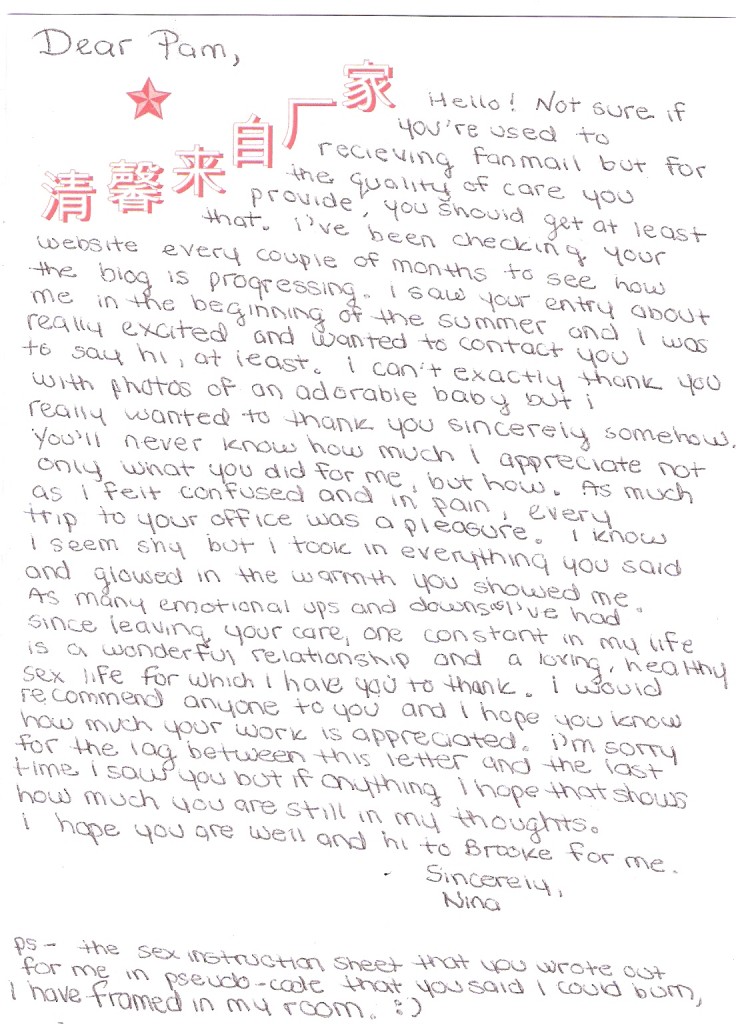