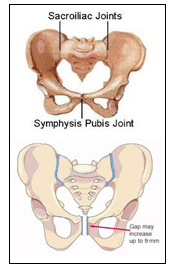 After a comprehensive pelvic evaluation, a pubic symphysis separation and malalignment can be identified. Our physical therapists perform gentle, effective joint mobilization and realalignment techniques to the pelvic joints including the pubic symphysis and sacroiliac joints. Modalities for pain are provided such as ice, electrical stimulation, ultrasound, cold laser, and TENS (transcutaneous electrical nerve stimulation). Soft tissue mobilization to the surrounding musculature, ligaments, and tendons is provided. Support belts and ambulation assistive devices are provided as indicated. We also prescribe progressive strengthening exercises to create stability around the pubic joint. Proper body mechanics for activities of daily living and improved postural awareness instructions to prevent further injury are provided. Whether this problem is acute or occurred many years ago we have had excellent results treating this disorder and our patients have been able to return to a painfree functional status. Our post partum patients have gone on to have future successful vaginal deliveries without reoccurrence.