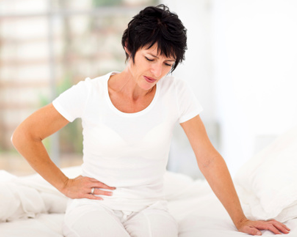 Persistent Genital Arousal Disorder (PGAD) is characterized by the patient having spontaneous unwelcomed genital arousal which is disturbing without having experiencing sexual interest or desire.  There is usually persistent genital engorgement and clitoral or penile erection.  Symptoms include genital fullness, congestion, swelling, tingling, throbbing, and sensitivity for an extended period of time.  Symptoms of arousal do not subside completely on their own. Dyspareunia (painful intercourse) and nipple sensitivity can be other complaints.  In the female, symptoms commonly occur at the clitoris, vagina, and labia. However, it is increasingly being reported by men.  Men complain of persistent arousal of the genitals.  Scrotal pain may be present.  For men and women, relief may be felt upon orgasm and ejaculation. Although several theories including psychological and physiological etiologies are considered, mechanical theories are suggestive of overactive pelvic floor muscles as an etiology, related dysfunction, or perpetuating factor.  Overactive (hypertonic) pelvic floor muscles, both superficial and deep, and/or associated overactive obturator internus muscles can cause compression of the pudendal nerve facilitating sensitivity or irritation of the nerve resulting in symptoms felt in the perineum and genitals.  PGAD can present with concurrent issues such as Restless Leg Syndrome and Overactive Bladder Syndrome proposing involvement of the pudendal, ilioinguinal, genitofemoral, or iliohypogastric nerves.  These nerves increase afferent sensations and changes in vascular supply of the hip and pelvic vessels may occur.  Other causes can include dietary such as consumption of phytoestrogens, medications such as serotonin reuptake inhibitors and serotonin-norepinephrine reuptake inhibitors, vascular issues such as pelvic congestion syndrome and varices, epileptic foci and other central nervous system pathology, and Tarlov cysts.  Some patients have had pelvic surgery such as a vasectomy or laparoscopy, or have had a history of urinary tract infections.

Assessment of patients with PGAD includes a thorough history and physical exam including gynecologic or urologic exam focused on the presence of hyperesthesia, engorgement, varices, and a pelvic floor muscle exam.  Doppler ultrasound and pelvic MRI might helpful in diagnosing.  Treatment options consist of physical therapy, cognitive therapy, acceptance therapy, medications such as anxiolytics and benzodiazepine, antidepressants, antidopaminergics, and antipsychotics.

A comprehensive physical therapy orthopedic and pelvic floor muscle exam is crucial. Your expert physical therapist will take a thorough history and evaluate your posture and mobility/alignment of your pelvis, hips, and spine.  Soft tissue palpation, neural tension tests, visceral mobility assessment, and a pelvic floor muscle exam will be completed. Pelvic physical therapy to address the overactive (hypertonic) pelvic floor muscles, myofascial trigger points, and adverse neural tension may be very beneficial. Commonly found trigger points in abdominals, suprapubic, inguinal and hip musculature, urethra and superficial and deep pelvic floor muscles will be treated with advanced manual therapies. Patients respond well to visceral manipulation of the urogenital structures and joint mobilization which targets realigning the pelvis, hips, sacroiliac and joints, and coccyx. Surface EMG biofeedback would be incorporated into the treatment sessions as indicated for patients to improve their pelvic floor muscle control. Relaxation training is another modality utilized by our therapists for successful treatment. Our experts at Pamela Morrison Physical Therapy have great success treating PGAD.