Ruling out Hip Impingement as a Cause of Chronic Pelvic Pain

Posted by Pamela Morrison on Mar 30, 2018 in Uncategorized

Femoroacetabular Impingement (FAI), also known as Hip Impingement, occurs when there is abnormal contact between the femoral head and acetabulum during motion. FAI and the muscle imbalances around the joint can alter hip and pelvic biomechanics during gait. Performing range of motion testing of the hip and special orthopedic tests such as the FADIR may help diagnose the issue. With the patient supine with one leg extended, flex, adduct, and internally rotate the hip. The test is positive if this reproduces the patient’s anterior groin or anterolateral hip pain. In patients with FAI there is a compensatory increased posterior pelvic rotation during active end range hip flexion occurs causing a repeated tensioning of the pelvic floor muscles (PFM). As the pelvic innominate rotates posteriorly there is an anterior tensioning of the PFM. Repeatedly this pulling causes constant tension on the PFM leading to overactivity formerly known as hypertonicity and/or high-tone pelvic floor. Also, because there is shared connective tissue between the obturator internus muscle and the PFM hip disorders frequently cause shortening or tensioning of the obturators which can create tensioning in the PFM by way of attachment and line of pull. This can result in chronic pelvic pain felt in the groin, buttock, sits bones, perineum, testicles, vagina, and be a cause of painful intercourse. 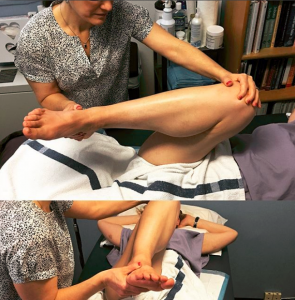